Ryan Pace To All Instructors 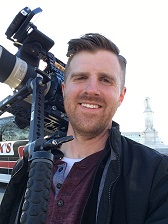 Nations Reach International Missions (NRIM) is dedicated to using media to develop the next generation of Christian minds.

NRIM was founded by film producer Shaker Rajasekar, MFA and his partner Ryan Pace, MFA to continue NRIM’s influential work.
Shaker has worked in the film industry as an actor and producer for over 20 years. He has worked at the top levels in the industry in India and Hollywood. After producing several awarding winning feature films, Shaker was an Executive Producer on the film “Robot”. At the time “Robot” had the highest budget of any film ever produced in Asia. This film was an amazing collaboration between top visual effects studios in Hollywood and the film industry in Bollywood. It was a collaboration that had not been successfully attempted before. Since “Robot”, Shaker has produced films such as the award winning “Blood and Curry” and has taught directing and producing classes at Regent University.
Ryan has worked in the film and television industry for over 15 years. Since starting his career as camera operator for Commonwealth Public Broadcasting (PBS), he has had the opportunity to work on camera crews for many production companies and networks such as TLC and Netflix. Ryan also has produced and directed award winning short films and short documentaries in the U.S., Europe and Africa. For over three years Ryan has been an Adjunct Assistant Professor at Regent University, teaching classes in directing, camera operations, broadcast television and more.
Through NRIM Shaker and Ryan are working to equip young minds, specifically in the media production industry, to go out with confidence to change the world.